How it all started: 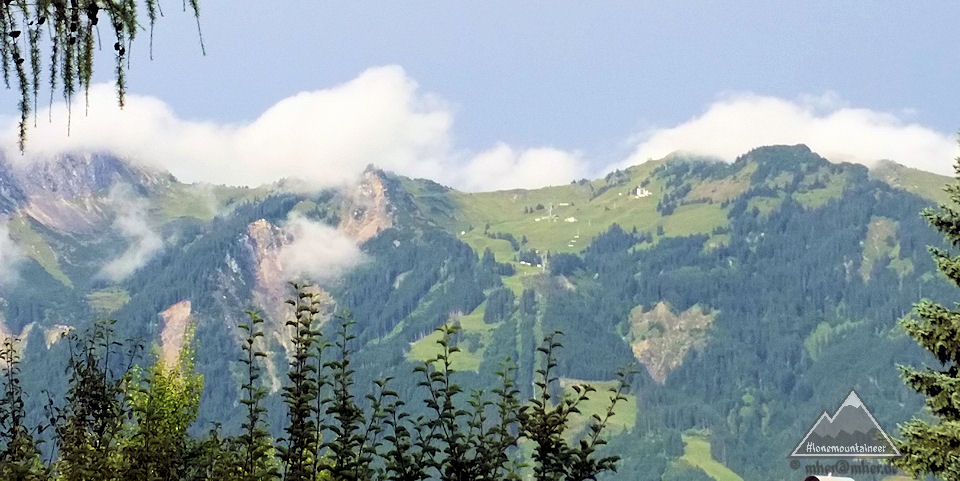 August/September 2014 I spent my vacacation with my family in Reutte/Tyrol. Unfortunately it was raining almost all the time. The first day the weather was still nice. So we took the opportunity and got up onto the Hahnenkamm with the Hahnenkammbahn. There we hiked via the peak of the Hahnenkamm all the way to the Lechaschauer Alm. On the return we followed the Alpenrosenweg via Singer hut. And from there back to the Panoramarestaurant Hahnenkamm next to the top station.

From our appartement we had once and again – whenever the weather allowed – a direct view of the Hahnenkamm and it’s meadows belows. The rose an ever growing urge in me to walk up there once. “The mountain is calling!” 🙂 But unfortunately the weather remained rainy and didn’t allow this for the rest of the vacation. And the urge hasn’t gotten that strong yet, that I would’ve hiked up there in pouring rain.

But somehow the challenge didn’t let go of me anymore. So finally at a free weekend in early June 2015 I spontaneously packed my hiking boots and backpack. Drove very early in the morning to Reutte or more precise Höfen. I parked my car at the big parking area above the valley station of the Hahnenkammbahn. Then I followed the signs in the direction to Gehrenalpe. 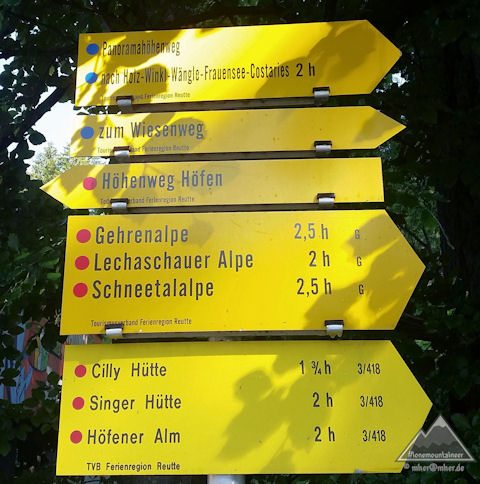 At first the track leads still down in the valley in direction Wängle and past the location Holz.

first it crosses a meadow. Then it leads behind the Panoramahotel Talhof and across the Leinbach. But there don’t turn left, but right, and after a few steps left again still in direction Wängle.

Then following the rural lane above Winkl to a T-crossing, where it leads now up into the mountain. The steep track leads rather steep through the forest uphill. Once in a while it crosses the forest road. You can follow this, too. I.e. to go part of the way on a longer but far less steep track. And from this you will have great views at the surrounding mountains as well.

After about an hour of hiking you have to follow the forest road for good. But only for a short distance. Then it leads up into the next steep track. When I hiked there in 2015 it was recommended, due to a small mudslide, to take the “old steep track” (“alter Steig”) 100 m further up the forest road. But it must have been closer to 300-400 m (as I realized shortly after) so I didn’t find it. I decided to take that not-recommended track anyway. In the end it wasn’t a big problem, only when crossing the small, in the meantime pretty stable slide, I had to find my own way. Shortly after I came past the upper end of the “old steep path”. From there I could judge that I turned around too soon to find the bottom end. 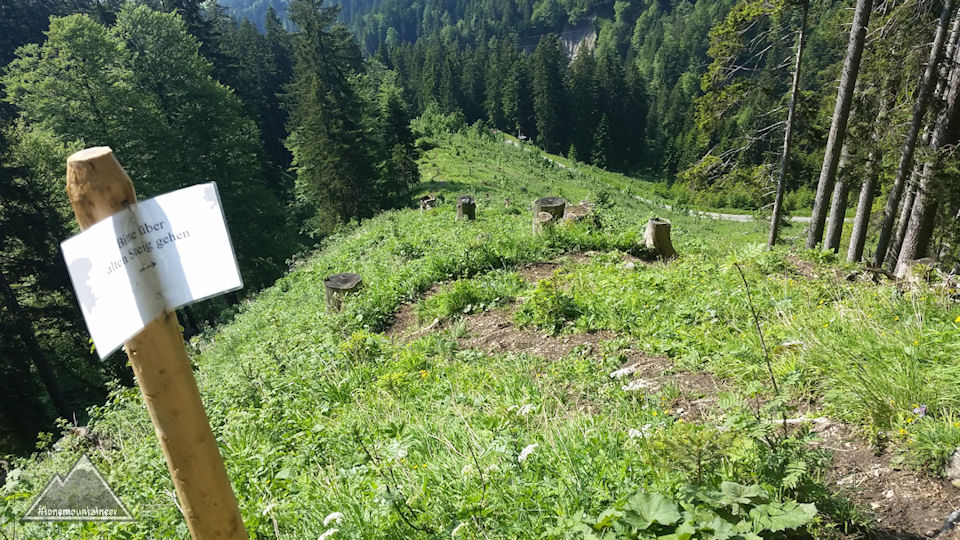 From here the path leads again very steep up through the forest.
After around two hours from the start you arrive – almost surprisingly – at the Gehrenalpe.

Here it’s great to have a nice, second mountaineer breakfast. And at the same time enjoy the wonderful view from the terrace. 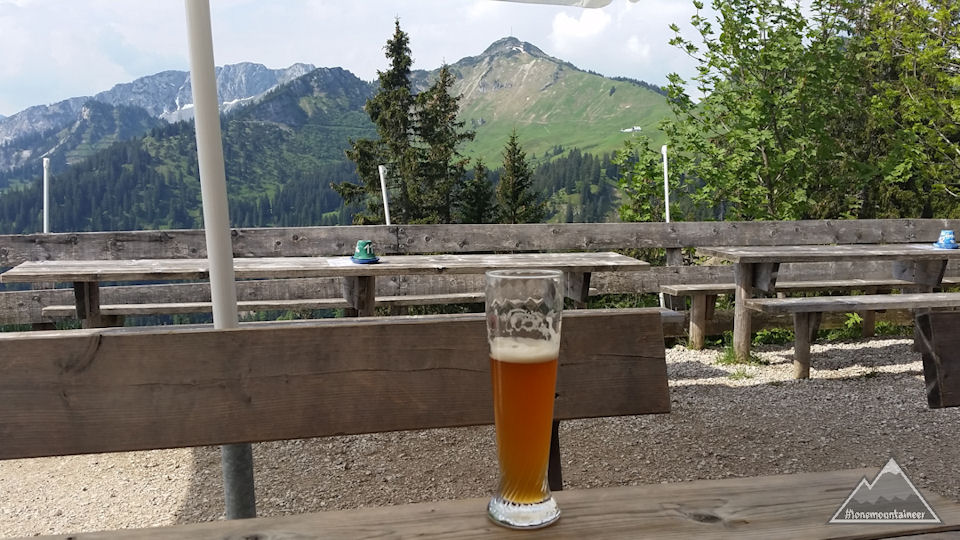 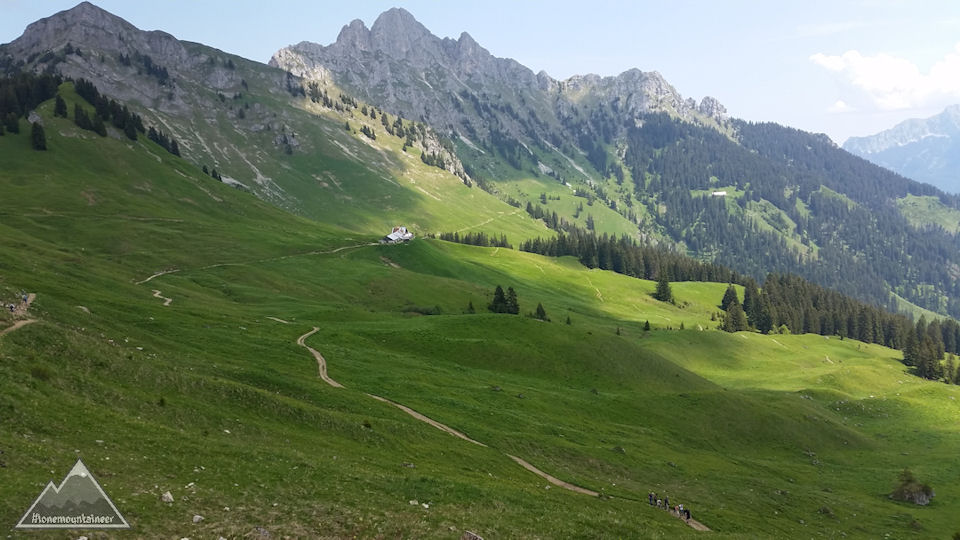 From the Singer hut a forest road leads back down into the valley. You can take some shortcuts across the ski slope instead of following the long turns of the road. Make sure you take the shortcut for the last turn, as this last road turn take a really long way. Of course you can also take the Hahnenkammbahn to get back into the valley. A ticket for the transportation back into the valley costs €13,00 for an adult person. (Seniors (born 1956 or earlier pay €12,50, Youth (born in 1999 or 2000) pay €10,50 and children (born 2001-2010) €8,00 while young kids (born 2011 or younger) go for free — prices for summer 2017)

All in all it’s still one of my favorite tours, especially because of the fantastic views on the way from Gehrenalpe all the way to the Singer hut. The way down on foot is more something for the serious, abitious mountaineer. The views show nothing really new, and going by the Hahnenkammbahn saves a lot of stress onto your knees. 😉