After my first tour this year in early April (Brecherspitz-Tour) I had to take some time off due to health-reasons. Then, last week, I had to pass again, this time due to the snowfalls the days before, which lead to so much snow in the mountains, that I’d decided to wait another week before going into the mountains again.

But now I had to go again: For the beginning of the season I planned some shorter tours and so I wanted to go from the Spitzinglake to the Bodenschneid summit. During the last days I tried to evaluate the snow situation in the mountains via webcam. From what I could see I thought it’s at least worth a try.

According to the weather report it would be best to go right early saturday morning. So I set my alarm clock, that I could leave home already at 7 in the morning. At home everything was  covered up in fog, and I hoped that the weather report was right and the sun would come out soon. And so it was: after only 15 minutes on my way I was already driving in beautiful sunshine.

This time I  didn’t park up at the Spitzingsaddle, but went on a little farther. Immediatly up at the saddle a rather small road, the Stümpflingweg, forks off to the right. This leads to a pretty large parking lot (free of charge btw.).  The parking lot was almost empty, which let me hope, that I wouldn’t have to expect too many “Co-Hikers”.

On the other side I started doubting that I decided right, as the two men from the car next to mine, were getting ready for a skitour. Did I judge the snowsituation that poorly? 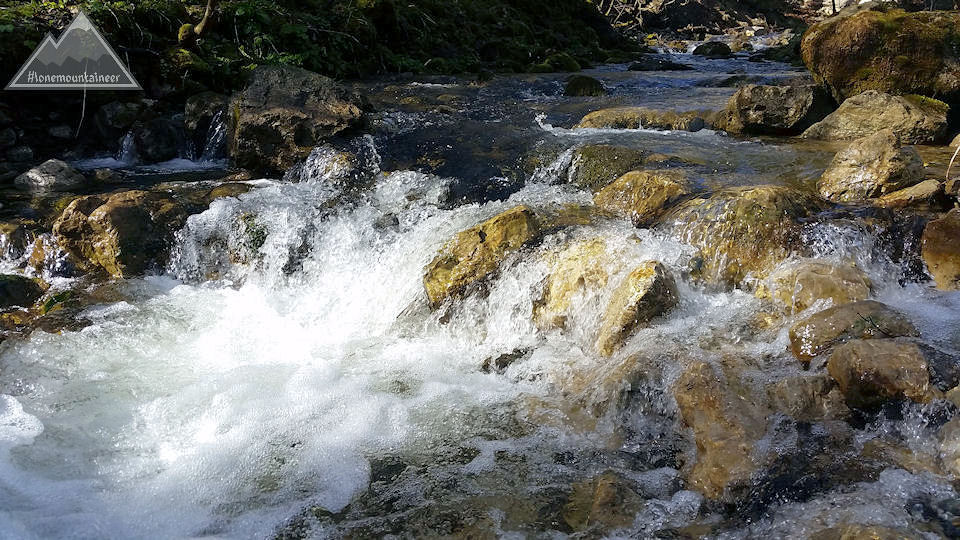 Well, never mind, since I was already there, I could just as well check it out how far I could go. Packing my backpack, I put my heavy hiking boots for starters into the backpack and wore the lighter trekking-shoes, as the first part of the track would be an asphalt road up to the Untere Firstalm (lower firstalm). Quickly I took a picture of the Firstgraben, the creek running alongside the parkinglot, which had, due to the melting of the snow plenty of water. The two skitourers took another direction, so that I hoped, that my way wouldn’t be that full of snow.

The Kratzerweg to the Untere Firstalm was completely free of snow. Left and right to the way a lot of cowslips. But you could see, that the snow of the last week didn’t do them any good. Half way up the asphalt road turned into a gravel road, but still free of snow. 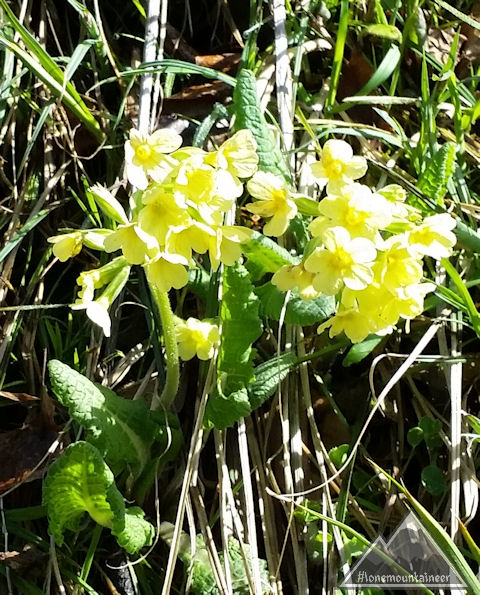 Despite a few fotostops I reached the Untere Firstalm already after about 30 minutes (the sign at the parking lot indicated 45 minutes). From here two different tracks lead to the Bodenschneid. My plan was to go via the Suttenstein up to the Bodenschneid summit and then return via Bodenschneidhaus, Freudenreichalm and Obere Firstalm (upper Firstalm).

As I had to cross a rather large snowfield all the way up to the Suttenstein, I changed shoes.

Due to quite some tracks in the snow I could easyly recognize where to go. In the beginning the snow was only ankle-deep and sometimes the snow even held my weight so that I bare sank in at all. But the farther I got, the more often the snow gave in and I sank sometimes kneedeep into the snow. But since the track from the Suttenstein up looked free of snow I fought my way further through the snow. After about 30 minutes I reached the Suttenstein. 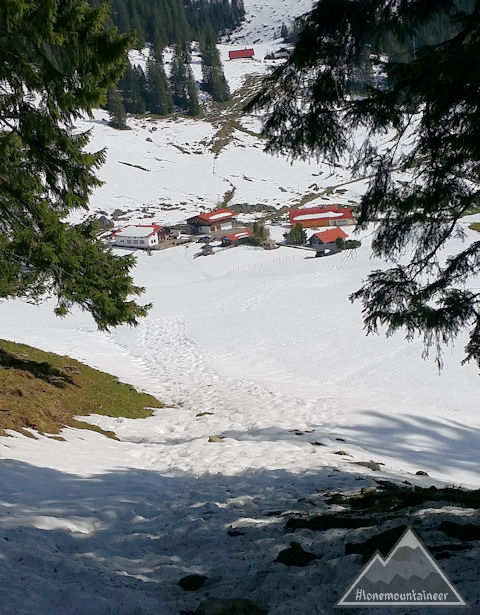 The rocky track lead steep, but free of snow, straight up. But after only a few minutes uphill I had to fight myself through at some spots deep snow. After 20 more minutes going steep uphill and the snow getting gradually deeper (at on spot I sank far over kneedeep in) I felt that this stepping through the snow took it’s exta toll on my reserves. As I couldn’t see any end of the snow and the distance to the Bodenschneid summit being still around 1 km plus that my hikingboots gave already way to the snow soaking my feet,  I decided to turn around. So that I wouldn’t be exhausted before I could make it back… but still some time to take a few pictures of the breathtaking view: 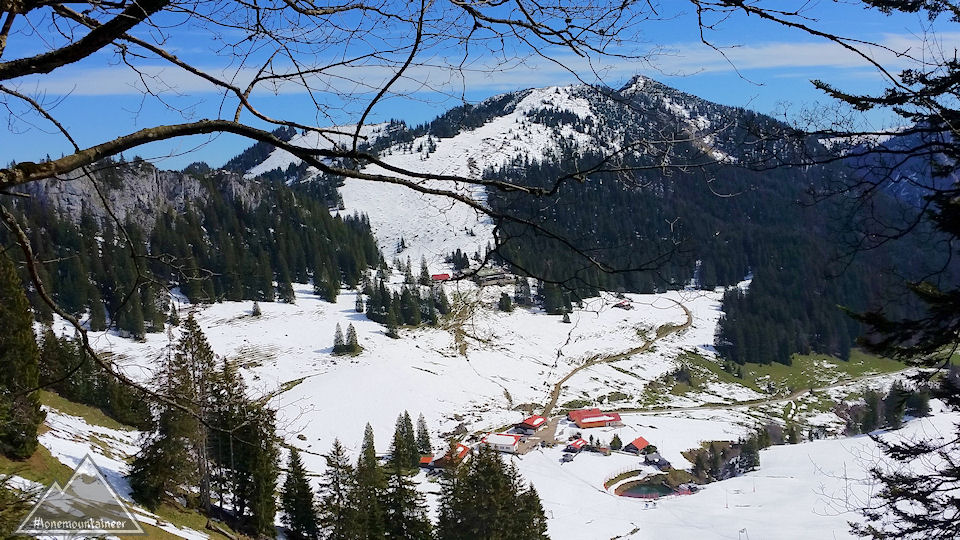 The return was rather easy, whereever possible I stepped into my tracks from the way up. At the Suttenstein I rested and enjoyed the views into the Suttental (Suttenvalley). From the southwest I could already see the annouced bad weather coming and the wind took up a notch or two .

The way down through the snow of the Nordhang (north hill) to the Unterer Firstalm went remarkably quicker and easier than the way up, so that it took me only about 15 minutes to reach the Untere Firstalm. Lots of hikers and walkers came uphill while I was on the road down to the parking lot. Probably they all “just” wanted to go the Firstalmen circular walk.

Even though I didn’t make it up to the summit of the Bodenschneid, so it was very nice for me and totally worth it. And next time (for sure this year) I will be able to end the tour as planned.

But what I’m going to get now for sure: gaiters, snowshoes, large plates for my hiking sticks and an improved impregnation for my hiking boots…